A collection of some of the most popular pokegirls and pokeMILFs given adult bodies, fully nude and ready to drain lots of pokeballs.

Most of the body shapekeys are intact, so you can customize the body to your liking (e.g. changing a slider to give her bigger boobs). Some extra clothing also included.

If that somehow doesn't work, go to File > External Data > Find Missing Files and point it to the folder with the common textures

Each .blend contains a model of the character based on the KinoPeach V1.08 body with a lot of improvements (bug fixes, reduced memory size (more than 200 MB lighter textures folder), removed junk data). Also included is a .hdr background based on the pokecenter map i made to go with these characters (upload here: https://open3dlab.com/project/29228/). Some props/clothes were also ported over from the kinoPeach models like the thighsocks, bunny ears, etc...

HOW TO INCLUDE IN A PROJECT (for noobs like me):

Let's say you have a .blend of a map you want to use one of these models in, here's how i do it (Not the best way to do it but it always works for me):

Originally, i wanted to have more pokegirls and port and customize the standard clothing of the respective characters. I ran out of time though so i decided to polish what i already had and release the models like they are now. I am taking a long hiatus from blender now (meaning i probably won't be able to answer your questions or read your comments) but if i ever start working on smut again i'd like to maybe polish the models some more and add new characters, clothes and possibly maps. For news and status updates you can always visit my DA: https://www.deviantart.com/frististains

All of these girls should be considered and are definitely intended to be 18+. They are also really just a port of the respective hair mesh placed on the KinoPeach body. The body was then altered to fit the style and theme of the character. If, somehow, one of these characters looks too much like a minor to you, change around the body shapekeys to something you do consider sexually mature. 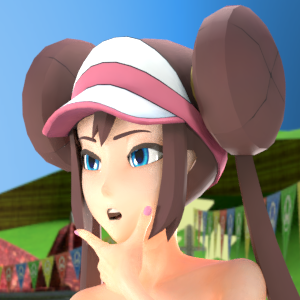